The Story of All Nations

The first and, to date, only Christian Reformed congregation in Halifax was officially organized in April, 1958.  However, as early as 1953, members of the Christian Reformed denomination were meeting together regularly as a church community.  These meetings took place in adherents’ homes or in the Wiswell Chapel of the YMCA building on South Park Street.

As the size of the church community grew, the attention of the Home Missions Board was drawn to the need for pastoral leadership.  As a result, Ralph Bos, who had been serving as a home missionary to the Maritime provinces, began in 1954 to travel from his Truro home to lead the worship services which were by then being held regularly at the YMCA chapel.  By 1957, the Christian Reformed Church community had grown to fourteen families and Rev. Bos relocated to Halifax to become more directly involved in developments here.  The missionary was housed in a parsonage located at 8 Rosemount Avenue in Armdale which had been acquired by the Home Missions Board.

In 1960, Rev. G. Andre came to serve as pastor and during his brief tenure assisted the consistory and congregation in planning for growth and greater self-sufficiency.

In 1961, Harry Mennega, a recent graduate of Calvin Seminary in Grand Rapids, Michigan, was called to serve as the pastor of the Halifax Christian Reformed Church.  At this time the congregation was still meeting in the YMCA chapel, and it was decided that better facilities would soon be required. Needs surveys were conducted in the growing Halifax suburbs of Fairview, Princess Lodge and Rockingham it was concluded that those areas would be appropriate venues for a new church building.  Accordingly, in 1963, four adjacent lots on Meadowlark Crescent, Rockingham, were purchased and Edward Gavel, a member and architect, prepared drawings for a small church building to be built on the site.  Unfortunately, the cost of building the structure proved prohibitively high and so the lots were sold by the church in 1966 (and are now civic nos. 5-13 Meadowlark Crescent).

Nonetheless, the Halifax Christian Reformed Church continued to grow.  A church school programme was established, with classes held on Saturday mornings at First Baptist Church on Oxford Street.  The transition from Dutch to English as the language of worship also began during Mennega’s ministry.

In 1964 Mennega was called to serve elsewhere and his position as pastor was filled by Jerry Dykstra, another recent graduate of Calvin Seminary.  The search for permanent facilities resumed, with options ranging from building across the harbour in Dartmouth to renovating abandoned houses on Lower Water Street being considered and rejected.  Eventually, in 1965, a historic Victorian-era house at the corner of Inglis and Lucknow streets (5651 Inglis Street) was acquired.  The building had previously been converted to several apartments so extensive renovations were required, including the construction of a chapel on the main floor which could hold 90-100 people, church school rooms in the basement, and a manse on the second floor.  The inclusion of a new manse permitted the sale in July, 1966, of the Rosemount Avenue property, which the congregation had acquired from the Home Missions Board in 1962.  On November 5, 1966, the first worship service was held in the new building by the congregation which then numbered approximately twenty-two families.

In 1969 John Winters became the congregation’s regular organist and in 1972 a new organ was acquired for the Inglis Street chapel.

In 1971, Jerry Dykstra began a full time university and hospital ministry in the south end.  As a result, Wayne Gritter was called to serve as a pastor, with Jerry Dykstra as his associate.  During Gritter’s ministry a number of changes occurred, including holding church school on Sundays and conducting monthly evening services at Joseph Howe Manor (a seniors residence nearby) and, during the summers, in members’ backyards.

By 1976, Rev. Gritter had taken a pastoral position elsewhere and the congregation was experiencing decline.  The option of disbanding was seriously considered. However, the process of seeking God’s will led to James LaGrand being called to pastor the struggling congregation, beginning November, 1977.  By 1978, the ministry had been revitalized and the congregation informally changed its name to All Nations Christian Reformed Church in recognition of the congregation’s widened ministry as well as the increasingly multi-cultural character of its membership.  Under LaGrand’s leadership the congregation reached out to the local universities and also developed a number of diaconal programmes, including an emergency food service and children’s clothing centre.  The congregation also broadened its ecumenical contacts within the city, through the Halifax-Dartmouth Council of Churches and also through the establishment of the annual “Epiphany Series” in which local ministers of other denominations preached at All Nations during epiphany on the theme “Light to the Nations”.  James LaGrand also served as a part-time lecturer in New Testament Studies at the Atlantic School of Theology.  During these years, the congregation advocated for change within the denomination, particularly as regards the promotion of the gifts of women in ecclesiastical office and also the severing of ecclesiastical ties with the Gereformeerde Kerk in South Africa because of its acceptance of the policy of apartheid.

Responding to the need for affordable housing in the urban core of the city, in 1981 several families within the congregation began organizing a housing cooperative.  They partnered with others in the community and the Canada Mortgage and Housing Corporation (CMHC) and by 1984 had built a twenty-two unit housing cooperative on Creighton and Charles streets in an economically disadvantaged and racially mixed area of the city known as the old north end.  A number of All Nations members moved into the cooperative and served on its board of directors.  The co-operative was named “Anathoth” to commemorate the prophet Jeremiah’s faithfulness in buying an abandoned property as a sign of the Lord’s intention to redeem the city.  During this time, many of these same members began organizing the worshipping community that came to be known as the North End Mission, which was designed to serve as a street level outreach to the surrounding community.  This ministry was motivated by a vision for a new ministry in the north end and by the need to alleviate overcrowding in the Inglis Street building’s small sanctuary.  With funding support from the Home Missions Board, the North End Mission called John VanDonk as its pastor in 1986.  The group met for worship first at the Joseph Howe School on Creighton Street and then later in a storefront unit on Gottingen Street near North Street.  The North End Mission did not receive sufficient support and by 1989 had been wound down, with attendees returning to worship with the rest of the All Nations congregation.

In June, 1987, James LaGrand formally completed his pastorate of All Nations Church and moved to Basel, Switzerland, to resume doctorate studies with noted theologian Marcus Barth. He was later called to minister in the Christian Reformed congregation in Gary, Indiana.

In the fall of 1987, David Kromminga accepted a call to become the pastor of All Nations Church.  The years that followed were marked by a preoccupation with finding larger accommodations for the congregation.  A number of options were initially considered, including the option of expanding the sanctuary within the Inglis Street building.  In August, 1989, the congregation began a successful space-sharing arrangement with the J. Wesley Smith United Church of their spacious church building on the corner of Charles and Robie streets.  However, this arrangement ended with the disbanding of the United Church congregation in December, 1993.  By this time the congregation would not have been able to fit back into the Inglis Street building (which it still owned and served as the manse) and so a number of other options were explored, including space sharing with the Seventh Day Adventist congregation on Parker Street.  Finally, in October, 1994, All Nations purchased the J. Wesley Smith building and embarked on a series of substantial renovations and upgrades.  In August, 1996, the Inglis Street building was sold, and a new manse was purchased in the neighbourhood to the west of the congregation’s new church home. 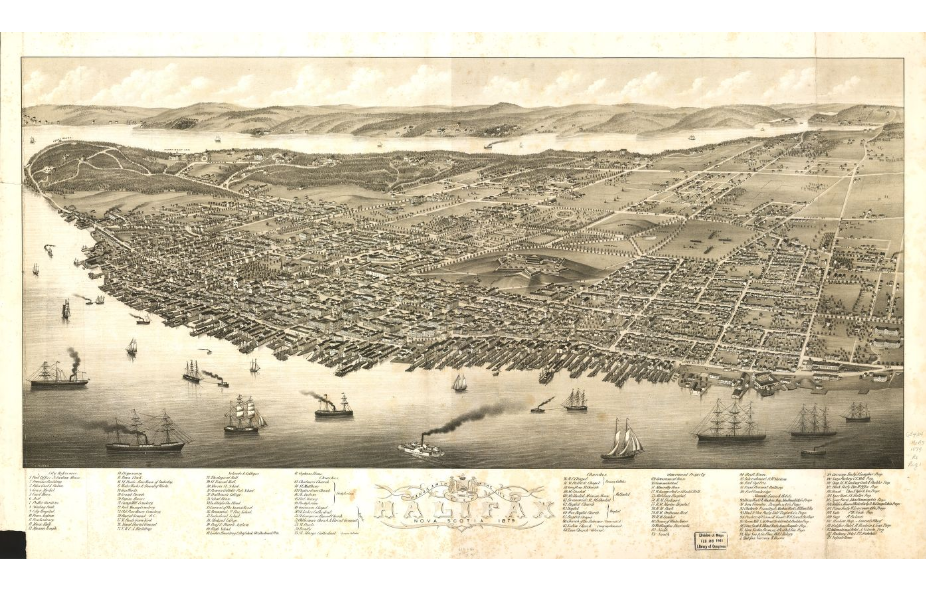 In the map, the current site of All Nations Church, at Robie and Charles streets is occupied by a previous church building.

Click below to enlarge the view (the + and – buttons on the left side of the map allow you to zoom in and out).

In October, 2000, Rev. Kromminga concluded thirteen years of service as pastor, having accepted a call to serve as the pastor of Sherman Street Christian Reformed Church in Grand Rapids, Michigan.  In the year following, the congregation was served by interim pastor Rev. Clarence Vos and by Rev. Peter Macaskill, who later became a member.

In 2001, David Vroege accepted a call to serve as All Nations’ next pastor.

In November, 2002, All Nations and members of the former J. Wesley Smith Memorial United Church congregation worshipped together to celebrate one hundred years of ministry in the current building.  This was at least the second church building located at this location, with the first building dating back to at least 1879.  When ministry was first established on this site by the Methodists, this area was on the outskirts of Halifax and was intended to reach out to the expanding suburbs.  One hundred years later, the building is now in the heart of the city, surrounded by homes and businesses and an abundance of pedestrian and street traffic.  The building’s neighbourhood has changed, but the mission to reach out in Christ’s name remains the same.

In 2003, All Nations celebrated fifty years of Christian Reformed ministry in Halifax.  In 2008 the congregation marked the fiftieth anniversary of its formation, in a celebration that was attended by former pastors LaGrand and Kromminga as well as other past members and friends.  Praise God for his goodness to our church!